I checked out the cutscene data for the game, which is all stored in one file called file_00.bin. There are 27 cutscenes in total (Europe has 60 due to having more languages), half of them being different versions of the cutscene that plays after the credits. They are as follows:

These different versions are all randomly selected whenever the final cutscene is played.

Subtitles aren't printed on the cutscene in the European version, they are rendered at runtime depending on the language. Despite this forward thinking, there is multiple copies of the story cutscenes for different title cards, making the overall filesize for file_00.bin double (2.13GB) what it is in other regions (0.99GB).

Curiously enough, the Japanese Tentouyou demo has a file_00.bin too, despite no cutscene ever playing in that version. There's actually an early version of the first story cutscene. The only difference I can pick out is the pair of boys in the last few seconds tilt around in the early version, which they do not in the final.

Now I have the mission value and the Japanese demo!!

Do you think that's there's nothing hidden? You'd be EXTREMELY WRONG!!! Everything is here and intact, EVERY SINGLE LEVEL. Granted, some small changes here and there but I'm not joking when I say every single level in the final release is here. I thought the game would crash at one point, but it only hangs when the stage ends. Imagine my surprise when I put 01 and... it loads the Sun level!? 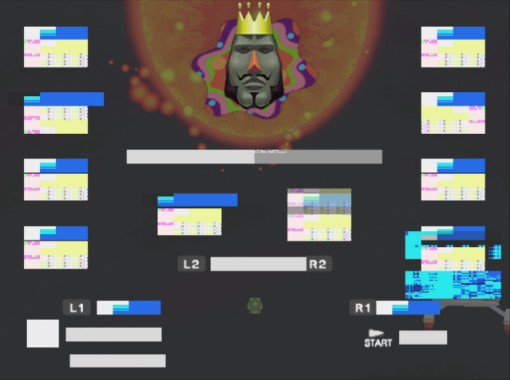 The Sun level has little to no differences, aside from the drumroll being the classic dummy noise.

The weirdest part of this, is that the demo is on a regular CD. With this information, you can fit all of We Love Katamari into a CD, it's just that the music and the cutscenes add 2GB of content to the disc.

Here's a video of me playing ALAP5 on the demo. You can see that the game over is intact, but the results are not. Whenever a stage ends, the King immediately does the Royal Rainbow and the game then softlocks. The PCSX2 console prints errors that it would spit out if We Love Katamari fails to load something.

There's a chunk of placeholder text here too. If you watch the ALAP5 video, they had not finished the messages for every loading transition, so the King just says the size and ends. There's also issues with the font they're using, as some characters appear to be unfinished, with a crossed out box taking it's place. 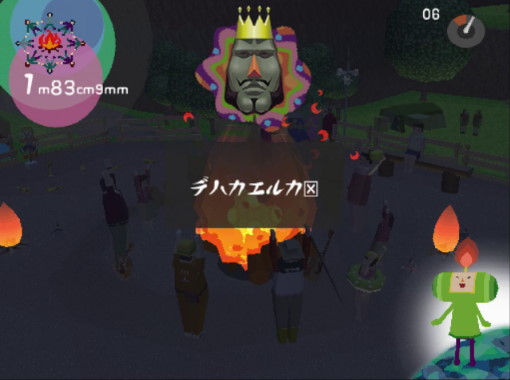 Now... is the Rose stage intact? Of course, it's there! I said all missions are in here, no?

Do you remember that test stage from part 5? I checked it out in this demo and it's exactly the same, same spinning old ladies with dogs around the corner. I guess they were done with it way earlier than I thought.

Going off topic for a bit, there's unused music in this demo! I'm not talking about La Morena Kumonai, which is also interesting but it's not unused. La Morena Kumonai was originally for We Love Katamari before being removed and hidden until a year later when it resurfaced as a rather difficult Taiko no Tatsujin song.

There's a vocal demo of Everlasting Love in the disc! It doesn't play normally in the demo, only when the game needs to play something that does not exist in the demo.I uploaded it to YouTube, please listen!

I tried it again with both namco transmission demos, v3.1 and v3.2. The demo in v3.1 is dated a month earlier than the demo in v3.2. I got the address for the mission and unsurprisingly, everything seems more complete. There isn't any placeholder sounds or messages, they seem to have finished localization when the demo released. Curiously though, some missions do not work in the v3.2 demo, namely all AxAP stages and the sun stage. Those stages load and run, but only the map loads, making the game effectively unplayable. Maybe Namco caught onto the fact that it was possible to play the missions?

Going back to the full game, I found the area in memory where important flags are stored. This can be from cousins, fans, to even planet information. Did you know it's possible to make a save file that's entirely unplayable? You can make the game think that the Soccer Boy isn't unlocked, making you unable to play the tutorial, making the game a dud. If you save your game while like this, you can make an impossible save file! 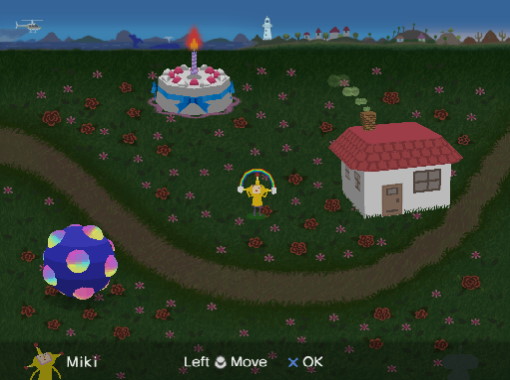 If you modify cousin unlock values to lock away every cousin, it'll be impossible to even go through the Select Meadow! Do you also want to make it impossible to do basically anything? I have good news for you! 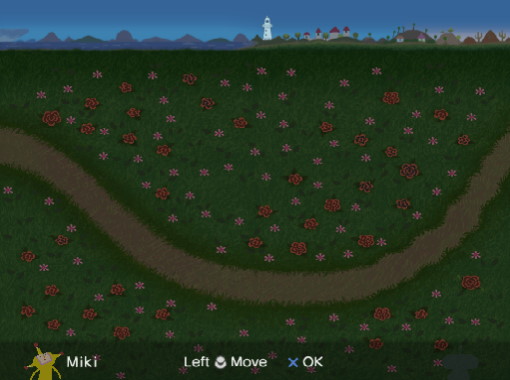 There is no Katamari. Leave.

Anyways, on the topic of fans, it's possible to unlock Michiru Hoshino. She is unlocked after you roll up the Sun and is only used if you want quick access to the credits minigame. She does not request anything and she only communicates with silence. You can make her request like any fan would though.

If you force her to request something, she'll raise her hand up and only show silence but that's not all! Make her impatient and you can make her say "Oh!" from her popular phrase. She's not supposed to do that.

Here's a funny little value bonus: 20B67A8E! It controls the alpha of the Katamari. Anything you roll up will turn as transparent as your Katamari. If you want, you can push around nothing! If you set it to zero, along with some values that are next door, you can make it seem like there is no Katamari. You'll still roll up things, but they'll go away as soon as they're touched. If you play a stage with this, I'd imagine it'd be confusing.