Round1 was kinda lame score-wise. I played a few rounds of IIDX and some GITADORA, but no notable scores were made.. I played DDR but the pad felt so tiny that I hated playing the moment I started. Very bad day that day. No score roundup today.

However, my Round1 got a new rhythm game! Dance Around! The single game I thought we would never get since the shop was running out of space. They recently relocated all their rhythm games towards the back, leaving a large empty space near the front. While this move is pretty nice, the new rhythm game area is very small. It's so small, that our Dancerush Stardom cabinet isn't even set up properly. There's no dancemat.

ANYWAYS, Dance Around! It's Konami's newest rhythm game where you follow a timeline of dance moves for a song. It came out in Japan earlier in the year around March and my Round1 has recently recieved their unit. I registered my e-amusement card after it asked for my birthday and didn't let me use my own name as a profile. Weird. 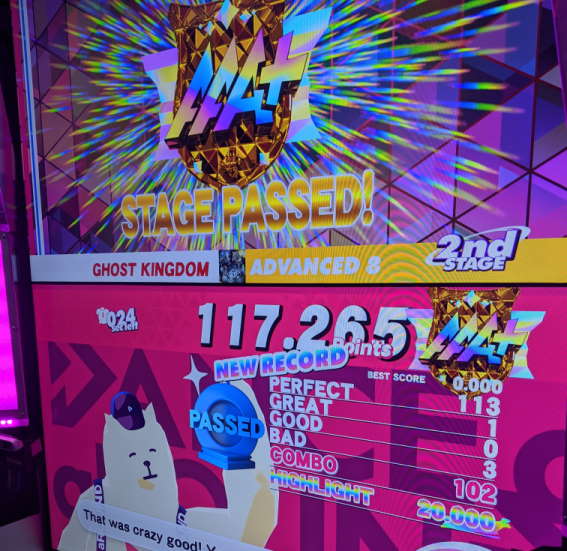 After doing the tutorial and selecting my songs, I proceeded to play the most easiest rhythm game ever. Seriously, I didn't really want to dance in such a public space, so I jittered and didn't really move around a lot, and I still managed to AAA a song.

Will I play it again? ...probably.

Will I pay money to change my dancer name? ...probably. Isn't the bear cute?

The site doesn't give that much information about the game. You can view your profile, your scores, and your scores from your recent thirty songs. As usual, the scores page is entirely locked away unless you are subscribed to the e-amusement Basic Course. Despite that, you could just view the recent play scores, it doesn't require the subscription and gives you all the details for that play. The Other Rhythm Games page has been updated with the 3 songs I played.

My Round1 also got gachapon machines. I tried it out once and the price for them are god awful, 24 Round1 credits for 1 gachapon credit. That's like 12 games in any rhythm game! All of the machines are set to 2 credits required! I remember there's one in the GameStop in the mall. That one was like $4 a turn! What's the deal? Anyways, earlier this month, the new beatmania IIDX game got announced. The 30th game in the franchise, RESIDENT. It sounds like a really basic name actually. It's supposed to be based off a 'resident DJ' but still. It's going to be weird calling the new IIDX style an actual word instead of made up shit like BISTROVER.

Some new features presented in the location test is a complete 1080p resolution and simplified note radar training. The 1080p resolution one might sound weird, but the game has been running at 720p since 2012. From the images I've seen on Twitter, everything looks so small. There's also an animation bug where some graphics haven't been rescaled for 1080p, causing them to be appear in the wrong location.

A few of my complaints are mostly just how basic a lot of stuff looks. I don't like the playframe, it's simply just white. There's been 3 games so far where the playframe was just a plain white frame. They also removed Six String Proof! It might be just in the location test, but it's an event song, why is it removed?

We probably have one more platform in CastHour SPACE until the next game drops. This game's unlock event has been rather boring.

Another reveal was Splatoon 3. Well, not a reveal, but just an informational broadcast. I haven't played Splatoon 2 in AGES! I think last time I played was in early 2021? I stopped playing around that time since I was playing constantly since release, and playing everyday constantly for 4 years hurts. I'm a little excited since my Splatoon buddies are gonna play again.

I have the game preordered. I haven't played my Switch since I beat MAD RAT DEAD way back in April 2021. I think I got some other games after that, but I'm actually not sure. I went through my library and I just barely remember owning games I thought I didn't have.

It's good to be back to Splatoon, it's been seven years since I bought a Wii U just for Splatoon. I bought other games for it, but they never reached more than 10 hours played, haha. It's weird looking at old footage for Splatoon 2 I have recorded when I got my Elgato capture device back in 2017. That stuff really was 5 years ago. Huh. Splatoon is also 7 years old. Jesus.

I used to have SO MANY Splatoon 2 videos recorded from that device. Unfortuantely, the hard drive failed sometime in 2020, so I lost some clips. I remember having to delete so many clips because my poor hard drive kept getting filled with them. It might be devastating, but looking back, they probably had me playing like ass anyways. I still have some clips uploaded to Google Drive, they were from the TMNT Splatfest. There's also my giant backup of my Switch's photo album dating back to 2017.

Then I started to reminisce about Splatoon on the Wii U. Remember how, before the 2.0 update, you could only get to level 20? Then when they updated it to reach level 50, you had to deal with this alternative levelling up system and it was super annoying? That stupid system made it so it would take hours to level up. I think I gave up around level 43. 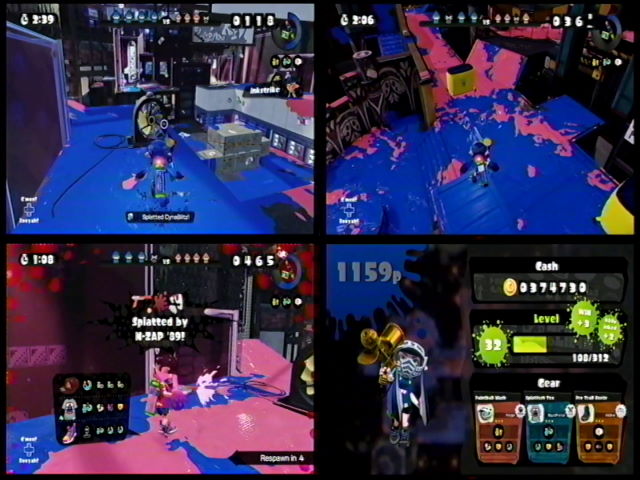 For whatever reason, I recorded the Pokemon Splatfest onto a VHS tape (this was before I had a capture card, much less a PC I could use) and stashed away for 6 years now. I think I made a page about it on this site way back when I first started to host it on Neocities. It's kinda stupid looking back, the page I made for it was god awful, but it's still nostalgic of me wasting my time on Splatoon and literally nothing else.

What if I finally done the deed of reaching level 50 in Splatoon? Hm...

This month's Goodwill! I found an AM/FM tuner, at last! I needed one as my Japanese Minidisc system doesn't reach a number radio frequencies from the US. It can only go up to 90.0FM, which locks me out of more than 91% of stations broadcasted here. It's a Technics ST-K50. It seems to be rather old, as it doesn't have a coax port, instead requiring the wires to be screwed in.

I connected my AM/FM leads to the tuner. I don't have the best signal to some stations unfortunately, though it might be an issue with my leads. Stations which have a weak connection have flickering stereo audio. Thankfully, the tuner has an option to disable stereo, which eases the noise. Maybe using a coax to wire converter might help? I'm not sure.

The issue now is that I need a set of speakers to output the audio. For now, I connected the reciever to my deck's tape deck jacks. I'll try finding an analog to digital converter and a digital audio switch so I can connect it to my deck and switch between the radio and my PC. If I really wanted to now, I could record radio stations to a MiniDisc.

Finally! No more AM radio stations and tuning into stupid political talk! There's really no music stations in the AM band. Well, AM licenses are cheaper than FM licenses... Alan's AM Radio soon?

They also had a bunch of VHS tapes, more than usual. Most of it were movies I already owned or sport clip tapes. I bought this one movie, Office Space, and I was watching it. It started to flicker at one part and I found out that the tape got chewed up at one point. 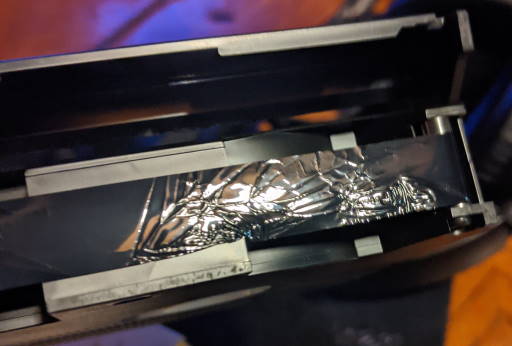 Scary! It was a Blockbuster rental, maybe it got dropped for this reason. My deck was making some weird noises during it, so I thought it bit the dust! Thankfully, it hasn't... yet. I'm scared! 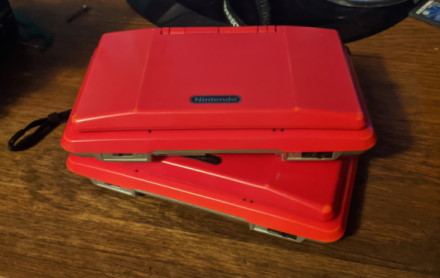 My brother had went to Salvation Army far from home. He found a couple of DS systems for $5.99 each! If you were thinking that they would be in horrible condition, you'd actually be right! At first glance, these systems do not seem too broken, but they do have some major issues with them. I'll go by each system one by one. 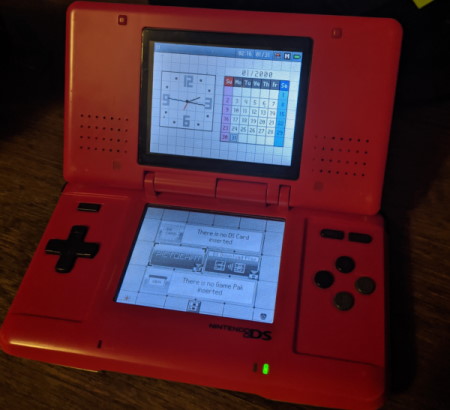 This DS is fine. The bottom of the shell has a large crack around the GBA slot. The hinge is little wonky, but it's to be expected in DS systems. The screens are rather problematic. They both have worn screen protectors which make the screens look like they have permanent moisture on them. The top screen has a handful of dead pixels. I don't see any other issues, so I think this DS is playable. 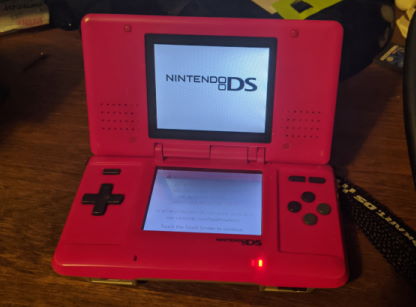 The other DS has way more issues. First off, the GBA slot's part of the shell is absolutely shattered, exposing the cartridge slot itself. I think some of the shell is stuck behind the slot too. The hinge on this system is more stable and the screens that rest beside them seem functional, but that's not the case. 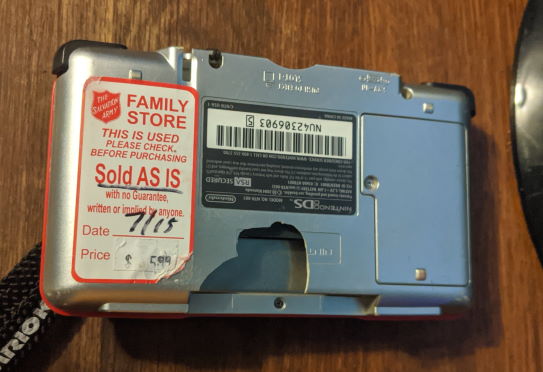 I should repair it... Do I even have the skills to repair it?

After 2 months, the package from May (Rather, the package that has stuff I bought in March, that I shipped out in May. I can't believe I forgot to mention that for months.) came in the beginning of the month! I forgot about the package. After 2 months of silence, around late July, it popped up in New Jersey and came home in a matter of days. How do I rate the surface mail service? I can say that it took a while and I'll probably use it again if I'm broke again. 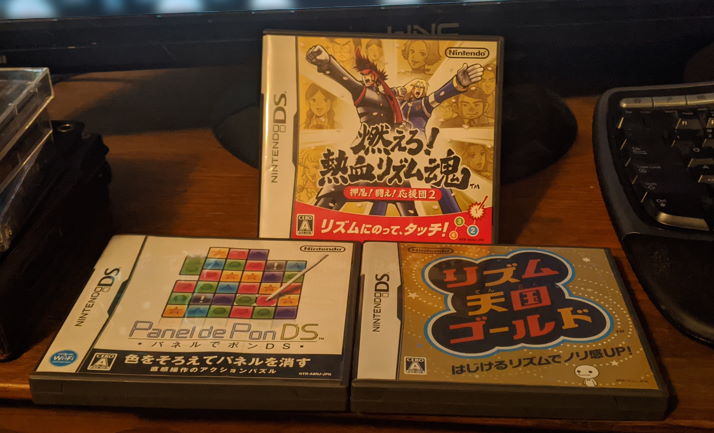 DS games! They were 500 yen each. They're all complete in box and they work just fine. They also contain their Club Nintendo codes, which is useless now since the service died a long time ago.

Ouendan 2 had a save file within it, as they had several replay files saved. They were pretty bad at it. They kept getting C ranks on the normal difficulty. I cleared out the data and managed to beat the game in the hardest difficulty in a few days. Now, I can finally play the game without it crashing half the time!

The only other game with save data was Panel de Pon. There's not much to it, they were pretty far ahead in the puzzle mode, but that's it. They didn't unlock the exclusive Lip theme either. I would go for it, but it seems way too hard.

Anyways, new semester of college starts real soon. I checked the syllabus for my classes and I'm already stressing out over assignments I won't even need to complete until months from now! I'll try my best to get through the semester.

Bonus sentence. I watched that new Chip 'n' Dale movie a while ago. I thought it was funny.