If you've been looking at rhythm game news recently, you'd know about WACCA ending network services when September kicks in. It's been a rumor around the community for months now and, despite that, I'm still surprised it's ending. I remember when my Round1 opened way before I got back into BEMANI, it was one of the games I would play. Once I got back into BEMANI though, I didn't really play it that much.

Of course, the game will still be playable in arcades. Marvelous will push an update that will make the game play offline. A few major changes happening in this update is that the game will no longer save user data to IC cards and a few songlist changes will be made. The pages for checking high scores will stay up until October, in which they will take them down. Better save your scores!

There's also a new rhythm game in town. MUSIC DIVER by Taito had it's location test last month and it's another circle rhythm game! It seems a bit tricky... I kinda want to play it, but it depends on if my Round1 can even get it. I wonder how long this machine can last before someone breaks it. It's just asking for someone to punch the screen.

Anyhow, this month in pop'n music Lively! I didn't play much this month, I'll get into that later. But the new monthly song is カゲロウ by Des-ROW・組スペシャルr, which is some alias. It's alright. Anyways, the ticket quest is neu. I'm scared to play it since it's a 42 on Hyper. 49 on EX! Scary!

Finally, the quest song is @n H@ppy Choice by Sana/good-cool. It's a remix of a song from pop'n music 6. Listening to the song, I expect it to be a very fun chart to play. I haven't unlocked it yet. I'll get it soon... maybe I'll unlock it when I stream pop'n music Lively on YouTube.

Back in the May 10th, 2021 post, I got a 486 computer. It had a 486DX processor with a 200MB hard drive, 8MB RAM, and some sort of ATI Graphics Ultra card. I installed a sound card into it but had zero luck getting it to work. In the post, I had trouble getting the card's own driver to talk with the card properly and I didn't have the patience to constantly check each IRQ and DMA value. It's been a year then, which is weird to think about, but now I have finally fixed it.

I was browsing YouTube one day and got recommended a video of a universal DOS sound card driver. I installed it and it worked just fine, all my DOS games output proper audio. Unfortunately, Windows couldn't take advantage of this driver, so no sound for Windows. However, I went on some forums and someone with a completely unrelated card had an issue that was similar to mine. They were told to install Sound Blaster 16 drivers for Windows.

I did just that and I was later jumpscared by the Windows 3.11 startup noise. I should've known I had to install Sound Blaster 16 drivers, it was a clone after all! 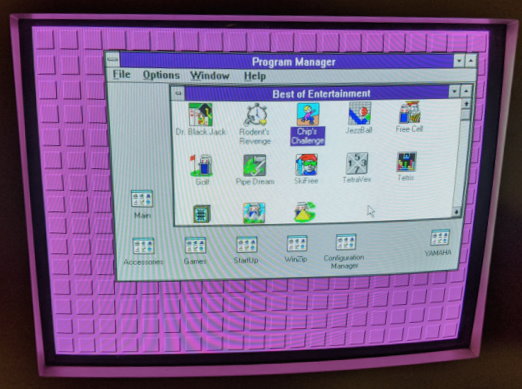 I installed a MOD player onto the computer and it works well. Some of my modules can't play due to the samples requiring more memory than what is avaliable though. It's funny, cause I checked how much memory was avaliable when the program was in use, there was only around one hundred kilobytes left. It's possible to have the module play in the background while you continue to use DOS, but I can't even load EDIT! I would add more memory, but it uses SIMM RAM, which I don't have any spares of. 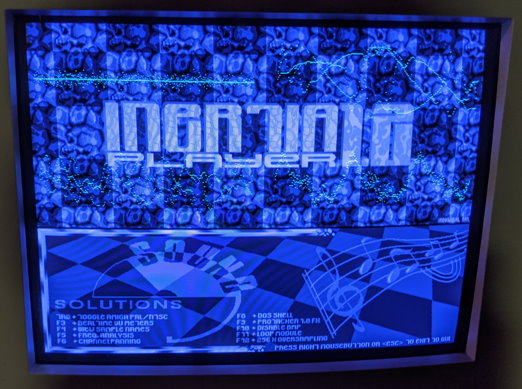 From this point on, the only thing I could do is upgrade the PC if I wanted to. It's a pretty lackluster PC: the graphics card isn't that great, sound card sometimes doesn't output anything which requires an entire reboot, and the memory limitations stated above. I'd assume it'd be pretty expensive and I'm not sure what's considered good or passable for a DOS machine. I know for a fact this thing is probably never going to run Windows 95 sufficiently, even if it barely meets system requirements.

I bought stuff from Yahoo Auctions! These aren't the items I bought a month ago, those are still in transit. Surface mail takes a few months.

After months of just needing more MiniDiscs, I got some. I was aiming to get 80 minutes discs, as they are longer than the ones I already have, and I needed to copy a CD that I also bought.

I actually asked my friends for their opinion, since I was deciding between two listings. I had posted the listing for these discs and another listing that is shown below. 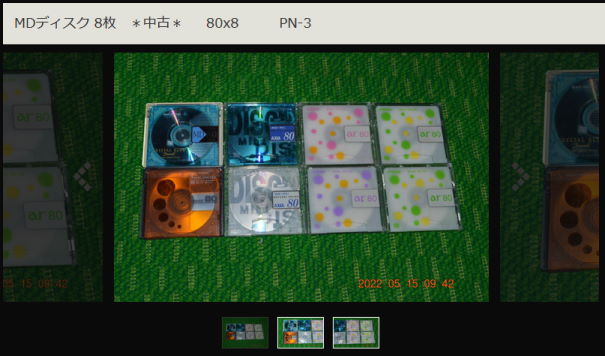 This listing was very unpopular. None of my friends liked it. One of them explained that the 4 Victor AR discs were too ugly. Looking at it now, yeah, those discs did look ugly. It's better buying the listing I bought since majority of the discs were all from different series. It's been a while since I found this listing and it's still left unsold. Maybe you could put it out of it's misery! It's only 700 yen...

I now have 15+ hours of blank discs. It's probably safe to say that I'm good with these discs.

Avex Rave '93 is a 74 minute long nonstop rave album. I just so happened to come across a low quality YouTube upload and liked it. I wanted to copy it to a MiniDisc, but it would be hard to record it from my PC since it was a nonstop album. It was being sold for only a couple hundred yen, so I went ahead and bought it. I recorded it to one of my new discs!

The other CD is the soundtrack to Katamari Forever, which is known as Katamari Damacy TRIBUTE in Japan. It's a rental drop, so the rental stickers are there and the spine is a little sunburnt. Outside of that, everything seems to be fine. The OBI strip is still there too. The lyrics are printed on a poster with a bunch of little doodles. I wish I could show all of it, but it's very folded, so it's hard to get a good photo of. 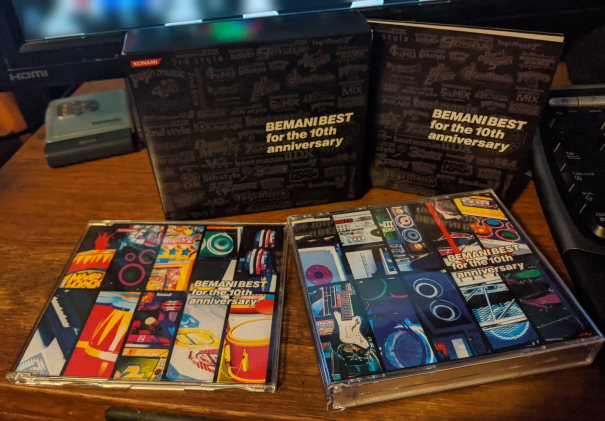 Last one is this big BEMANI BEST of 10th ANNIVERSARY album. It's a 5 disc album with handpicked songs from every BEMANI game up to 2007. I got it for around 500 yen. I got it because it has a lot of my favorite music, and I would probably save a lot of money buying this rather than the respective game's soundtracks.

First disc has beatmania and beatmania IIDX songs, second disc is Dance Dance Revolution, third disc is pop'n music, fourth disc is GITADORA, and the last disc is the other BEMANI games like Dance Maniax and Keyboardmania. The final disc also comes with ee'mall songs, notably Custom-made Girl -NOT FOR SALE!-, which is one of my favorite Sana songs.

Click here for a complete track listing from vgmdb.net. 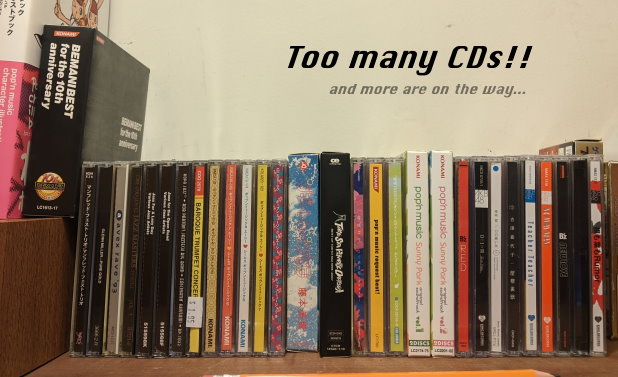 I have no more space in my closet!

Recently, Japan Post had raised the price of all shipments yet again. It's pretty bad for the US, so I'm not sure if I'll continue importing as much as I did. Only time will tell, but it's very upsetting to see how bad it's been getting... FedEx hasn't changed their prices yet, so I guess I could use them instead. Once FedEx changed their prices though, no more importing! I'm tired of the rising prices!

Then again... the Japanese Yen has been falling in value recently. My pop'n music Lively subscription is $2 cheaper now. Maybe I should take this opportunity to just buy stuff? Do I need a therapist?

I remember a year ago, I used to want a Japanese mobile phone. No reason other than they usually look very stylish. I would go on Yahoo Auctions and just look at the countless flip phones avaliable. A lot of them have this very professional and premium feel to them. Just imagine how cool you would look taking them out... 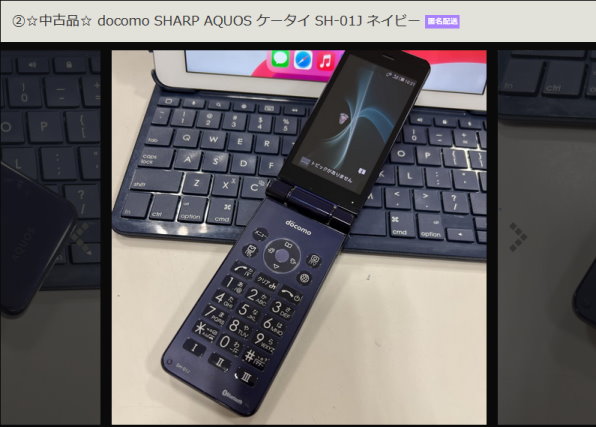 Flip phones are being produced everywhere still, you could go to a local grocery store and probably be able to buy a flip phone. I think some mobile providers still hold them. While Japan does have some premium models, they also got goofy looking ones. 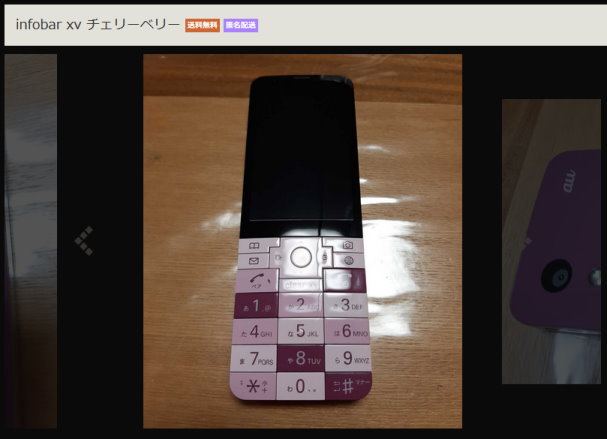 Maybe you want something a little minimalistic? This looks pretty cute. 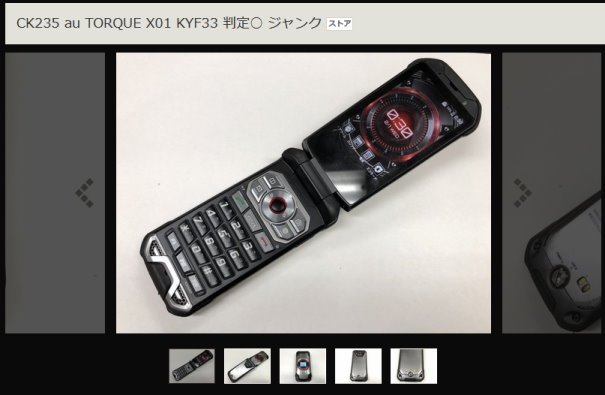 You also got this one which is just over the top.

Do these things work in the US? I have no clue. I think the non-carrier locked phones might work? I don't dabble in phones at all, so I wouldn't know too much. I don't think any of the flip phones will work here. What a shame! I wanted to look cool!

I was on vacation out of the country for half of the month. I managed to get sick twice. Once I came back, I got sick again! Thankfully, it's nothing major, just a cold and some bad stomachaches. Very cool!