Hello, it's been a month!

I went to Round1 multiple times since the last post. It'll be a heavy photo dump of scores. I finally got used to CastHour, despite playing almost none of the new songs.

The current unlock event when I went was WORLD TOURISM. A new part to this event unlocks a pop'n music song. I went ahead and went through unlocking it. After half an hour of playing, I unlocked it. The hyper chart is a level 9, which is on the very end of my ability. Nevertheless, I tried multiple times to pass it and I did. 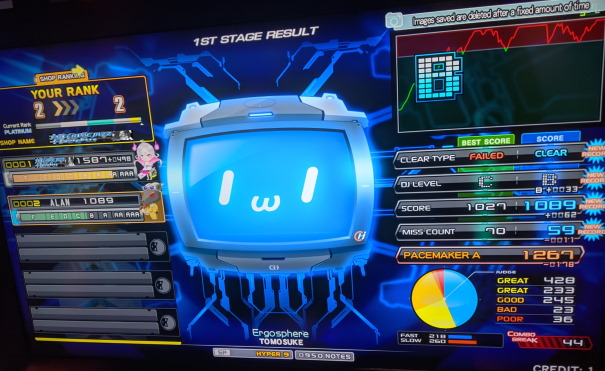 I can finally pass level 9 charts now, but I'm still too scared to play any. 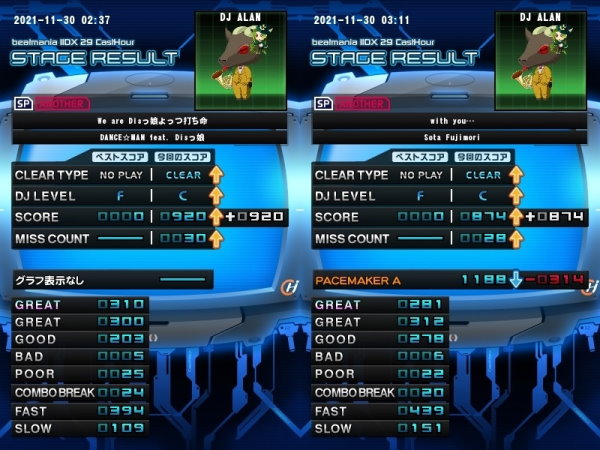 I also passed 2nd Dan. That's 2 classes higher than what I ended with the last version. 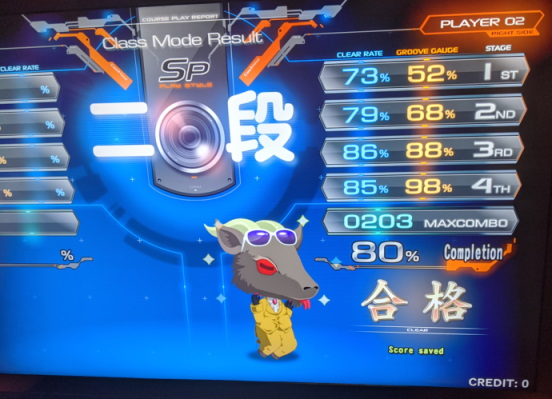 I went again a few days later, I tried doing some songs and a class trial.

Overall, my scores were pretty bad that day, but I got some new level 9 clears. 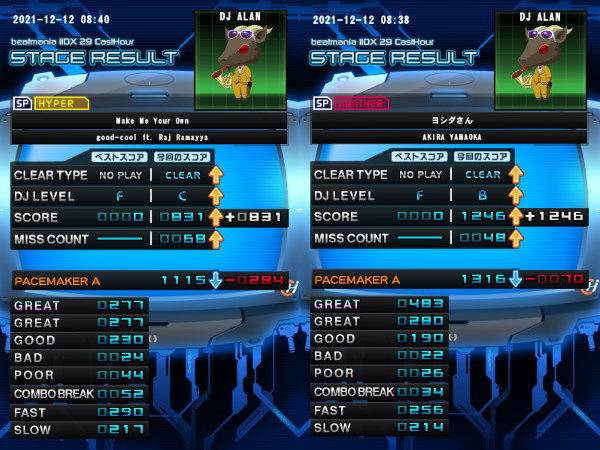 I tried 3rd Dan and passed! My clear rate did seem to start taking a dip. 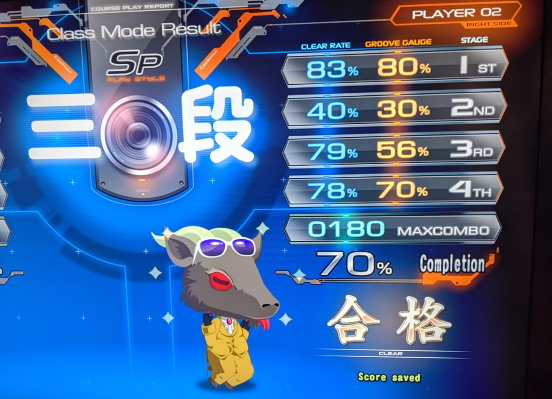 I found out PON remixed a song I liked from long ago, so I played it. I was so ecstatic when I found out and I got an AA first try! My first AA ever! I really wish Konami didn't region lock video recording, this was the best! 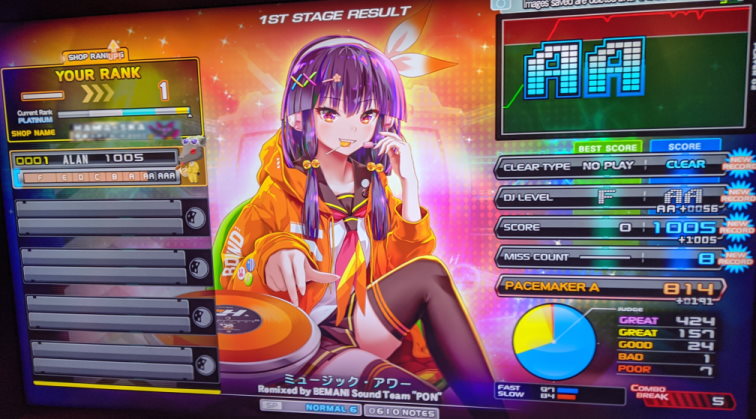 There was a new event when I went later called CastHour SPACE. It's a whole new unlock event. There is a song called kors k's How to make OTOGE CORE that has a funny video that parodies Japanese YouTube videos. I think it's funny and a very nice break from most other videos that try to be cool. I grinded for a while to play the hyper chart. I would post a good score I got but I forgot to save the screenshot!

I also remember playing and I think I cut myself on a key. I started to bleed a bit but I quickly cleared it up.

I got back to playing drummania. I was trying to get past my level 3 barrier. Despite me not being able to play anything above level 4.00, I decided to play a level 5.70. Mikeneko rock was a pretty alright song, but the end kept screwing me over. The e-amusement site shows me that I kept retiring very close to the end.

When I went to play drummania again, I decided to play a song I had played on GuitarFreaks. Mikeneko JIVE & Jive is a level 4.90 song. I played it anyways cause I liked the song a lot. I thought I'd retire before the song was even over, but I passed with only 24 misses. I'm pretty proud of myself. 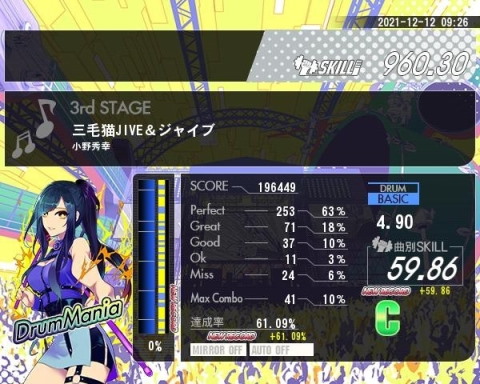 I'm close to being able to play almost every current song by Hideyuki Ono and the other Anettai Maji-SKA Bakudan songs. Their music is so good. 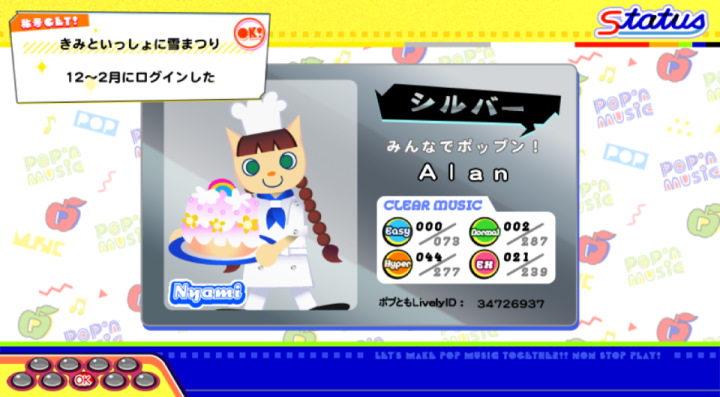 A new month of pop'n music Lively means my rank has gone up. I got a handful of songs because of the rank increase. 9 out of 10 songs are ones I haven't heard of, the odd one out being monde des songe, which is a pretty annoying song. There is also the monthly bonus song, which is Odoru Fever Robo. I don't really like it... There is also the monthly unlockable song, Getsufuma-den, which is based off an old Famicom game. I would like to play it, but I would have to go through the tedious unlock system to get it. It'll wait for now.

I bought it as I liked some songs from the pack. Thankfully, the price was only 3036 yen instead of the pricey 6091 yen. I already got an AA on one song first try! Below is a video of my accomplishment.

I enjoyed this pack. I hope the next pack will add more music from Sunny Park, I wanna play World Color! 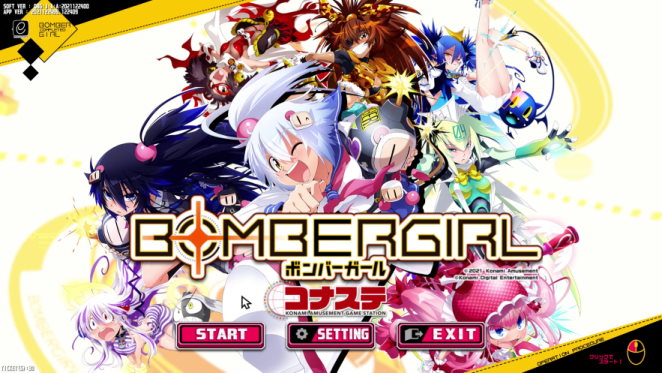 On the subject of Konami's Konaste line of games, they had recently released BomberGirl for PC. The game had a beta test back in 2020 which I wasn't able to play as I didn't even have an e-amusement pass then. Unlike pop'n music Lively, which requires a subscription to play, BomberGirl allows you to pay ¥110 for 5 tickets or play with a subscription. 5 tickets are required to play 1 game without the subscription or to pull an item from the gacha. New players get 10 tickets for free. 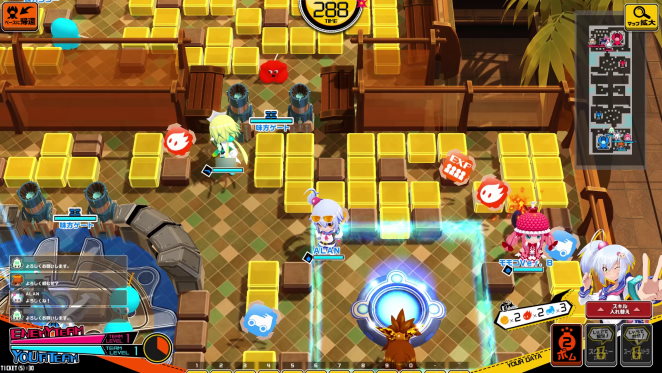 BomberGirl is exactly how it plays in the arcade. It plays similar to 'capture-the-flag' type games where you must reach the other teams bases and take them down. Every character has their own stats for health, walking speed, number of bombs, and bomb radius. There are also skills which deal more damage than a bomb. The game ends once a team loses all their bases or time runs out. After the game ends, you are able to play the gacha and earn items like clothing, voice lines, or even new characters. A gacha roll is 5 tickets. If you're playing with only tickets, you get one free gacha roll per game. 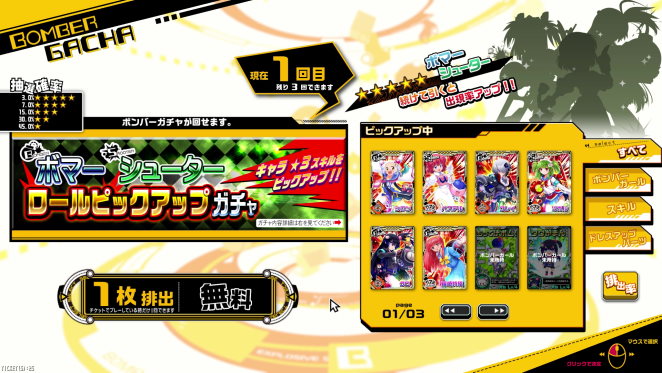 I played both of my free games and paid for an additional 5 extra plays. I can say it's alright, but I think the price point is the worst aspect of this game. It's ¥110 for 5 tickets and the subscription service is ¥2,178 which is roughly $20. Games don't last that long and you don't get a single free gacha pull if you pay for subscription. I will try playing occasionally, but I don't think this will be something I'll be all over.

I would like to mention that days after the game came out, Konami pulled it down for maintainence because the gacha was not dispensing the right items. They refunded any tickets used before maintainence happened.

I played DanceDanceRevolution Grand Prix. It's the newest DanceDanceRevolution game for home play. The game is pretty confusing to play. You can play a handful songs for free, but you can only play the easiest chart for them. If you want to play more songs, you can pay ¥110 for 1 game, at the cost of not being able to save any scores. There's other ways to play, but they're extremely stupid. If you pay for the sub, you can play every song up to SuperNova 2. If you pay for the sub and pay more for tickets, every song is avaliable to you.

I'm having issues with adjusting my timing in the game. Outside of the tutorial, there's no way to check if your timing settings are correct unless you drop a dollar to test it. You can't even adjust it in the middle of a set.

I went to Goodwill again recently. If you read my other posts, I haven't had a real big score from there in more than a year. I went again pretty early and I found a Sony MDS-JE320! It's a pretty basic model, nothing too fancy. It was broken, but it's only my second time finding anything MiniDisc related at a Goodwill, so I bought it.

It had a few issues, whenever it was connected to power, the drive would start having this repetitive grinding noise. After a good deal of testing, we decided that the problem we had was a pretty common one: the eject button inside the machine wasn't being pressed.

The easiest way to fix it is just wrapping the metal piece with a thick material so it can press the button with ease. We did just that and everything seems to work okay. We originally thought it might've been an issue with a gear but we were wrong. 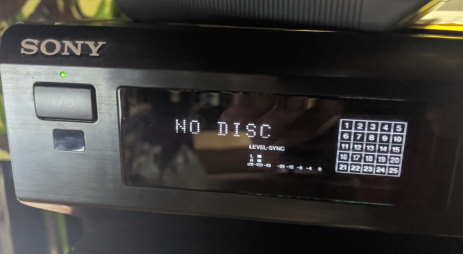 Now comes the major issue, we can't fully test it. I don't have any discs lying around and prices for used discs are expensive. I imported some from Japan which, as usual, is cheaper than buying domestically. As of now, they arrived at my proxy service's warehouse, but I'm waiting for other things I bought from Yahoo Auctions. It'll have to wait until after New Years, but it gives me something to write for next month.

A minor find here I would like to mention; I went to Goodwill later in the week and found 3rd-party Nintendo S-video cables. I tested it out with every console that supported the original video cables such as the Nintendo 64 or GameCube. To be honest, I thought that it'd be the cheap way out where manufacturers would have the composite signal go through the S-video plug, making absolutely no difference whatsoever. I was surprised when that wasn't the case though.

Below is a video of me playing pop'n music GB on my GameCube via the Game Boy Player, recorded with the S-video cable connected to my Panasonic NV-DM1 deck. I doubled the resolution so YouTube doesn't ruin it.

Below is a snippet from some screenshots. Left is composite, right is S-video. 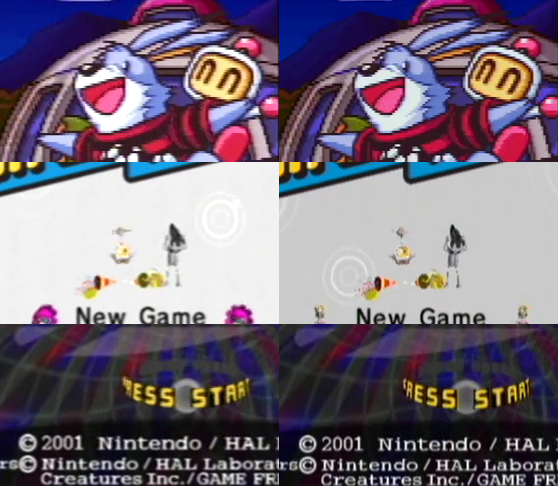 Recently, a new PS4 exploit had dropped. It requires firmware 9.00 which released in September. I haven't used my PS4 that much since September, as I'd only play Katamari Damacy REROLL that month, so my PS4 was already on the firmware. I decided to bite the bullet and try out the exploit.

It's a pretty simple exploit. If you get your PS4 on a webpage where the exploit is hosted along with plugging in a USB flash drive with a special disk image formatted onto it, you're able to load into custom firmware. I haven't done much with it as I haven't really bothered with anything past doing the exploit. I would "test" some games out, but PS4 games are huge. I don't want to go over my data cap again.

I'm pretty sure doing the exploit will cause account termination, but I don't care as I don't play games online.

That it for today. I'm excited to see if the MiniDisc deck works. I'll post a new blog once the discs arrive and I perform some tests. I bought a lot of other things from Yahoo Auctions, along with my proxy service being closed for the holidays, so it'll take a while. See you next year! Have a great 2022!